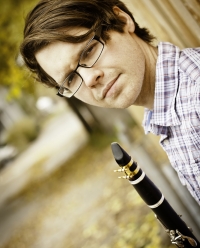 Master of Music in Clarinet Performance and Literature from Northwestern University

Bachelor of Music in Clarinet Performance from Columbus State University

Brady believes that every person will learn and grow best through structure, repetition, and intention. Structure helps students young and old have a sense of comfort and trust when walking into lessons. Structure is created within the components of the lesson - long tones are always first, then scales, followed by any additional technical exercises; next, are any etudes or solo repertoire; and last is any ensemble music or excerpts. With these three components present, teacher and student can work together to best maximize the efficiency of the lesson time and what priorities are needed at any given point in time. Repetition is key to students growing musically. Lessons are a great time to learn, but they are not a great time to grow. There are 168 hours in a week and a student's lesson only takes up 30 minutes to one hour of that week! The other 167(.5) hours are vastly more important to the student's growth than the one lesson they have each week. It is monumentally important that students repeat the concepts learned in their lessons during the rest of the week. While some say, "practice every day you eat!", student and teacher work together to find the best practice regimens and methods for each individual student. Intention is the glue that holds structure and repetition together. While in lessons there is structure and in personal practice there is repetition, if there is no intention behind what we are doing, both structure and repetition fall apart. Creating miniature goals for everything a student does helps the student to focus their attention and not mindlessly "get through" their practicing and lessons. Student and teacher work together to set intentions for each exercise, each scale, each solo, etc. Structure, repetition, and intention work together to help the student succeed at any goal.

Brady has served on the faculty and as campus director at the Music Institute of Chicago's Lake Forest and Lincolnshire campuses since April 2017 and in the fall of 2018 was added to the Applied Music Faculty at Lake Forest College. He previously served as an associate member of the Civic Orchestra of Chicago in its 2013/2014 season and has played as a section member with the Rockford Symphony, Northbrook Symphony, Chicago Composer's Orchestra, Lagrange Symphony, Marriott Theater, Timeline Theater, New Horizon Theater, and Springer Opera House. With his chamber group, 10th & Broadway, he served as ensemble-in-residence at the 2011 Sewanee Summer Music Festival and has played recitals at the 2012 and 2013 Vandoren/Buffett Clarinet Festival, the 2011 International Clarinet Association's ClarinetFEST, the 2009 Georgia Educators Convention, and at various concert venues in Chicago, Los Angeles, Atlanta, Nashville, and Raleigh (NC). He maintained private studios in the Nashville, Atlanta, and Chicago areas; has served as the clarinet para-professional at Hinsdale Central High School from 2013 to 2015, where he taught clarinet lessons, studio class, and chamber music; and has given masterclasses at Columbus State University. Some of his private students have gone on to major in music at Depaul University and have been members of the Chicago Youth Symphony Orchestra, Illinois and Georgia All-State Bands, and various regional honor groups throughout TN, GA, and IL.

"If everything goes, nothing matters"

Consistency is key - Practicing for 15 - 30 minutes, five to seven days a week, will serve you better than practicing an hour and a half, once or twice during the week.

Stay mentally focused during your practicing - If you have distractions, take a five minute break then come back. Practicing an etude/passage mindlessly is almost like not practicing at all. Play passages in different rhythms, emphasize different notes, and do the exact opposite phrasing. Find ways to keep your mind engaged.