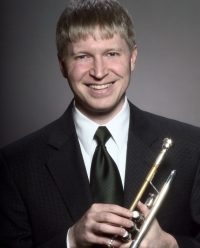 Two of Mr. Hasselbring's most significant teachers were those with whom he studied during his time in college. They include: William Fielder, and Vincent Cichowicz.

Mr. Hasselbring's philosophy relates to what he believes the power of music has. In his opinion, music has the power to bring people together on many different levels. For Chris, it is a privilege to work with students of all ages and abilities to discover commonality through musical expression.

As an educator, Chris has played over a hundred in-school educational performances, workshops, and master classes as a member of the Singapore Symphony, Dallas Brass, Robert Morris Ensemble, Quintette Chicago (Brass ensemble), and MIC ensemble-in-residence, Orquestra de Samba (Brazilian music ensemble), which he founded in 2003.  In addition to maintaining a full-time trumpet studio at MIC, Chris has formed natural trumpet ensembles, which have been featured at the Chicago Brass Festival, the Chicago Early Music Festival, and the Music Institute of Chicago’s Annual Gala Fundraiser, as well as at numerous studio recitals and MIC-related public events. In collaboration with his brother Jack Hasselbring, a New Jersey public school music educator, he developed a method that utilizes natural trumpets to teach the fundamentals of brass playing called Brass for Beginners. This program has been offered free of charge to underserved youth in Evanston and Chicago schools since 2007, funded by the Music Institute of Chicago and the Elizabeth Morse Charitable Trust. As a performer, Chris appears regularly with organizations such as Ars Viva, Chicago Philharmonic, Chicago Master Singers, Camerata Chicago, Elgin Symphony Orchestra, Metropolis Symphony, Apollo Chorus of Chicago, Handel Week in Oak Park, and The Bach Institute at Valparaiso University.

Additional accomplishments include: Orquestra de Samba received an International Brazilian Press Award for in 2008 for “Outstanding Incentive for Brazilian Music in the U.S.”