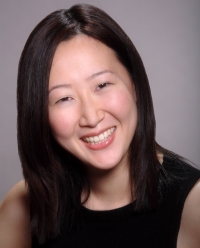 Katherine received her B.M. from the University of Southern California, M.M. from the Cleveland Institute of Music, and Artist Diploma from Yale University.

Katherine K. Lee has garnered numerous accolades throughout her career as a pianist.  She was a prizewinner at the Fifth and Sixth National Chopin Competitions, Chicago Chopin Kosciusko Competition, MTNA Competition, GM and Seventeen Magazine National Concerto Competition, Fischoff National Chamber Music Competition, American Pianist Association Competition, and she has received recognition as a Presidential Scholar of the Arts, Illinois Scholar, and Gilmore Young Artist.

As a Young Gilmore Artist, Katherine participated in the Gilmore Keyboard Festival where she made her debut on National Public Radio’s Performance Today and was subsequently nominated for NPR’s Debut Young Artist of the Year.  Katherine made her orchestral debut with the Chicago Symphony Orchestra in the televised Illinois Young Performers Competition and was invited to return the following year to perform Saint-Saën’s Carnaval of the Animals, which she also performed with the Chicago Youth Symphony Orchestra in Grant Park for the Independence Day Celebration.  Other orchestral performances include appearances with the Florida Philharmonic Orchestra, Florida International University Orchestra, the Skokie Valley Symphony Orchestra, and the North Shore Orchestra. She has performed in venues including the Kennedy Center, Preston Bradley Hall, Beverly Hills Public Library, Second Presbyterian Church, Northbrook Public Library, Fourth Presbyterian Church, Alliance Française, Fontainebleu, and Milan.

Over the years, Katherine has held numerous administrative positions including Artistic Director of the Society of American Musicians Competition in Chicago, Masterclass Coordinator for the Beethoven Festival, Junior Academy Coordinator at the Music Institute, and co-chair of the Emilio del Rosario Piano Concerto Competition.

Past Program Director for the MIC Chamber Music Program.

Katherine served as a volunteer and board member for KANWIN, a non-profit organization that helps women and children dealing with domestic violence, and was presented with its first Hanul “Sky” Award. Additionally, she founded the national governing board for Sigma Phi Omega Sorority, an organization that was founded in 1949 at the University of Southern California by Japanese-American women who had returned from the American internment camps post-WWII. She launched a research project, which uncovered the identities of the founding members and the sorority’s unique history, which was closely integrated with Asian-American history in Southern California.

"Learn something new every day."

Take the time to uncover all the hidden gems in the music. Slow practice is a good thing!

Sitting in the gallery of Symphony Center on Sunday afternoons, going to the White House, meeting Bill Clinton, and performing at the Kennedy Center.

Miss Lee was invited to speak in a panel discussion about “The Many Faces of Collaboration” at the 2015 National Conference on Keyboard Pedagogy, and was a guest teacher at the University of Manitoba in Winnipeg, Canada, where she performed in the series Beethoven’s Revolutionary Sonatas for Cello and Piano with Dr. Minna Rose Chung.