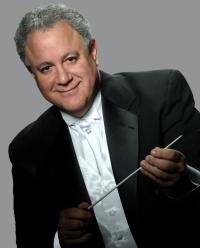 Lawrence earned his Bachelor’s Degree in Music Education (in both instrumental and choral music) at Indiana University, and completed his Masters Degree in Orchestral and Opera Conducting from the same institution.

Lawrence Eckerling began his work conducting the Community Symphony at the Music Institue of Chicago in September of 2009. In addition to those duties, he also teaches the Quartet Strings and Musicianship classes.

Eckerling has served as Music Director of the Evanston Symphony Orchestra since 2002. He was named 2007 and 2014 Illinois Conductor of the Year by the Illinois Council of Orchestras for his work in Evanston.

Eckerling is an active pianist, having performed as guest artist in Gershwin’s Rhapsody in blue with the Mt. Prospect Community Band and the St Cloud Symphony Orchestra.   He regularly performed with the Chicago-based Duetri Ensemble and is also active in the jazz and pop fields. Since 1984, as leader of "The Momentum Band," he presents live music from classical to rock and roll for private functions throughout the Chicago area.

Eckerling makes his home in Glenview, Illinois, with his wife Sharon, and his son, Jeremy.