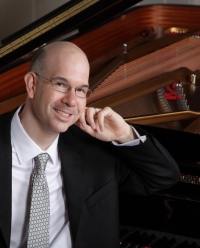 Matthew Hagle is a graduate of the Peabody Conservatory (BM) and Yale University (MM, DMA), receiving faculty prizes in piano, accompanying, and music theory as well as a Fulbright Scholarship to study privately in London. He has studied with Claude Frank, Robert Weirich, Donald Currier, and Maria Curcio Diamand.

I love to be around bright and curious people who are excited by music! I try to challenge my students on an intellectual/musical level, but also to remain sympathetic to the problems they might face in trying to improve their skills. As a piano teacher, I try and teach students to better understand how the music is put together, how to listen to themselves (harder than it seems!), and how to use natural movements of their bodies to build a playing technique. As a musicianship teacher, I try to teach students to recognize and listen for the building blocks of a piece of music. As a composition teacher, I try to take the students' individual ideas and help them problem solve with a sense of compositional structure and historical awareness.

Hagle lives in the Chicago area, where he has performed at local venues including the Ravinia Festival's Martin Theatre, Symphony Center, and the Chicago Cultural Center. He has also been heard in halls throughout the United States, including at the National Gallery of Art, the Museum of Women in the Arts, Symphony Space in New York, and the United States Supreme Court.  Internationally, he has performed in chamber music and collaborative performances across England, Australia, and Japan.
Hagle performs frequently on radio station WFMT in Chicago, and has been heard on NPR's Performance Today and Minnesota Public Radio's St. Paul Sunday Morning.

A valued collaborator, Matt has been the principal recital partner of violinist Rachel Barton Pine since 1999. He has also performed with members of the Chicago Symphony.
He also plays in a piano duo with his wife, Mio Isoda-Hagle.  A dedicated teacher of piano, music theory, and composition, Hagle's students have won prizes in local and national competitions. He is currently on the faculty of the Music Institute of Chicago serving as the director of the Musicianship program in addition to his teaching duties.

Any time spent practicing without careful listening is a waste of time. Just because you are at the instrument, making sounds, doesn't guarantee that you are really practicing.