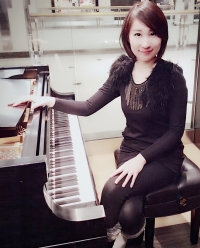 Some of Ms. Ma's significant teachers and mentors include those with whom she studied during her years in school. Robert Shannon was her instructor at the Oberlin Conservatory, Antonio Pompa-Baldi at the Cleveland Institute of Music, and George Vatchnadtze at DePaul School of Music in Chicago. She has also been influenced by those that she has worked with and attended master classes with throughout the world such as Sergei Babayan, Alexander Toradze, Yoheved Kaplinsky, Emanuel Krosovsky, Vladmir Viardo, Fou Ts'ong, and Russell Sherman.

Weiwen Ma, a native of Shanghai, China, has been described by world celebrated pianist Antonio Pompa-Baldi as “[having] flare and technical prowess. Her keyboard skills are remarkable.”
At the age of 16, Ms. Ma received numerous invitations to perform concerts at some of China's most prestigious venues, including the Shanghai Concert Hall and the Shanghai Great Grand Theater.
In 2008, she won a Bronze medal at the First Chinese International Piano competition and subsequently performed in the winner's concert at The Town Hall in NYC.
Shortly thereafter, she performed with the Cleveland Institute of Music's orchestra after having won first place in concerto competition.
Immediately following her performance with CIM orchestra, she made her Carnegie Weill Hall debut in May 2009 as the winner of the Bradshaw & Buono International piano competition.
Most recently Ms. Ma performed a solo recital at Pianoforte foundation Salon Series in March 2015. The concert was live broadcast on Chicago Classical Radio Station WFMT 98.7 FM.
She is also the prize winner of many other international piano competitions including, The World Piano Competition, the Corpus Christi International Competition for Piano & Strings, the Kankakee Young Artist Piano Competition, and the Thousand Islands Piano Competition.

Additionally, she performs regularly abroad in countries such as China, Italy, Switzerland, the Dominican Republic, and Poland.