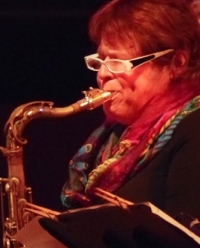 Lessons at the Wisconsin Conservatory of Music with renown jazz educator and pianist, David Hazeltine, 1990 - 1991

I learned about jazz theory from David Hazeltine at the Wisconsin Conservatory of Music.

I was very lucky to record with and be mentored by jazz organist Mel Rhyne when I moved to Chicago in 1996.

I met a wonderful pianist with a long history in Chicago, Earma Thompson. Earma and I played many gigs together and she was very encouraging!

One of my mentors here in Chicago was the great jazz pianist, Jodie Christian.

I also was very encouraged by the saxophonist and jazz veteran, Von Freeman.

I like to encourage my students to get excited about playing music. I first evaluate where they are with their sound on the instrument and their ability to read music. I try to motivate them to learn scales and theory, and also work on expression and ear training. The beginning jazz improv students love learning the blues scales and then applying them with different rhythmic variations to play alongs. Music has to be enjoyable! Jazz or blues playing is a challenge, but it's fun!

Juli has recorded five CDs with five different groups playing some classic jazz repertoire, some originals, and even some Finnish folk songs played in jazz styles.

She was awarded two different grants from the Finlandia Foundation to record Finnish folk songs with her quartet.

Juli was named Performer of the Year 2018/2019 by the Finlandia Foundation and received a grant to travel with her accompanist to several cities in the USA to play concerts of the jazzed up Finnish folk songs.

Juli Wood has led several bands at jazz festivals and in clubs around Chicago and the midwest. Her ensembles include; The Big Bari Band, Chicago Calling, Natalies Wood Plays Roland Kirk, and the Juli Wood Quartet.

Juli was chosen as a mentor for the Chicago Jazz Institute's Women's Leadership Initiative.

She has been teaching private lessons for the past 35 years.

I enjoy visual arts. I used to weave rag rugs on a big loom. I learned how to do that at a Finnish language camp in Minnesota. I called it my color therapy. I love to travel ! I've traveled to and played gigs in Japan, Spain, Sweden, France, Finland, and Canada. I've also visited my niece while she was in the Peace Corps in Morocco and Armenia.

"There are two types of music - good and the other kind." - Duke Ellington

I like to take a tune I'm working on and run the melody a few times to have that sink in. Then I like to practice improvising on it. Using a metronome is great to keep from dragging or rushing.

There are so many great jazz standards I enjoy! I like the compositions of Charlie Parker, Horace Silver, Wayne Shorter, and Dexter Gordon

I've had so many great gigs with wonderful musicians here in Chicago, in Milwaukee, and in Finland. I was very pleased by everyone's playing in the Big Bari Band at the 2019 Chicago Jazz Fest. We rocked that tent!