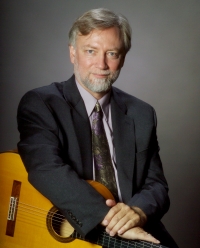 I teach children from the age of four through their last performing degrees in university levels and beyond. Teaching the guitar involves a technical and deep musical understanding, informed by historic performance practices from renaissance to modern day, that directs one's approach to crafting the child's earliest stages to coaching the developing young artist. I have developed guitar pedagogy classes at the university level as well as created lab environments for the university guitar student to learn to teach young students.

Mark Maxwell has been on the faculty of The Music Institute of Chicago since 1985 and has served as the Coordinator of Classical Guitar Studies at the DePaul University School of Music since 1986. He has performed as soloist and chamber player throughout the Chicago area since that time, but has mostly concentrated his career on the guitar duo repertoire with his wife and duo partner since 1981, Anne Waller. Soundboard magazine wrote of The Waller and Maxwell Guitar Duo, “Great playing! This duo delivers the goods from moment to moment, and piece to piece.” As energetic proponents of duo guitar playing, Anne Waller and Mark Maxwell have toured the United States and Europe for more than 20 years. Their unique programming of works for both 19th-century and modern guitars provides rare insight into the evolution of this captivating art. Recently they were invited to perform a program of all nineteenth century guitar music on their original period instruments for the Mannes School of Music Guitar Festival. The Waller and Maxwell Guitar Duo have been presented in a wide variety of concert venues including the Phillips Collection in Washington D.C.; Guitar Foundation of America festivals in Tempe, Arizona, Milwaukee, Wisconsin, and St. Louis, Missouri; the Mid-America Guitar Ensemble Festivals; The American String Teachers Association National Convention as clinicians, performers and competition judges; The Rantucci Festival in Buffalo, New York, The Barnett Foundation in Chicago, The Society of American Musicians in Chicago: Dame Myra Hess Memorial Concerts and Mostly Music, Inc. in Chicago as well as by guitar societies in Dallas, Chicago, Minneapolis, Memphis and North Carolina. In addition, they have performed in recital and as concerto soloists at colleges and universities throughout the United States and have been featured in live broadcasts on both commercial and public radio including the “Studs Terkel Show” and “Eight Forty-Eight” on WBEZ and as frequent guests on“Live from Studio One” and "Live from Mayne Stage" from WFMT in Chicago. Waller and Maxwell have performed extensively in Italy under the auspices of the Associazione Giovanile Musicale where they were praised for “their absolutely sublime touch” (La Sicilia) and for “strong playing, but at the same time delicate and clean” (Libertá). They hold the Diploma di Merito for their duo performances in Oscar Ghiglia’s master classes at the Accademia Musicale Chigiana in Siena, Italy. The Accademia awarded them the Società Italiana Autori ed Editori prize and has sponsored them in many performances throughout Tuscany. They recently were on the jury for the XXIX Concorso Internazionale Chitarristici di Gargnano. Anne and Mark are active teachers as well as performers in the Chicago area. They direct the classical guitar programs at Northwestern and DePaul Universities. They also work to develop young guitarists at the Music Institute of Chicago, the Northwestern Music Academy, the DePaul Community Music School and in the National High School Music Institute and the Northwestern Summer Guitar Workshop at Northwestern University. Their most recent recording, Grand Pot-Pourri, featuring the terz guitar duos of Mertz and Giuliani on historical instruments is available from the Pick-Staiger ticket office at Northwestern University and on-line from AURec.com.

Two, actually: "We are musicians, not bone-polishers," and "Segovia taught me to love the notes," both from Oscar Ghiglia. And then: "Hermits United. We meet up every ten years. Swap stories about caves. It's good fun. For a hermit." Dr. Who, as played by David Tennant.

Also a quote from Dr. Who: "Are we sitting comfortably? Then let's begin..."

The Suite from El Amor Brujo by Manuel de Falla, which Anne and I arranged for two guitars. It is our signature piece as the Waller and Maxwell Guitar Duo.

Performing on the stage of the Accademia Musicale Chigiana in Siena, Italy where Andres Segovia, and Oscar Ghiglia after him taught and played. Interviewing legendary British guitarist and lutenist, Julian Bream, on the Pick-Staiger (NU) stage in front of a live audience with Anne in 1995.