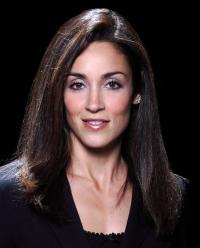 Ms. Aznavoorian received her Bachelor of Music degree and the coveted Music Performers Certificate from Indiana University where she studied with Menahem Pressler, and she received her Masters of Music degree from New England Conservatory.  Past teachers include Lev Vlassenko, Carolyn McCracken, Evelyn Brancart, and Emilio del Rosario.

Equally at home in the classical repertoire as well as the twentieth and twenty first century works, Ms. Aznavoorian has performed premiers by Augusta Read Thomas, Laura  Schwendinger, Stacy Garrop and Marta Ptaszynska, as well as standard repertoire such as Poulenc, Mozart and Schumann Piano Concerto.  In strong demand as a chamber musician, Ms. Aznavoorian has collaborated with many artists such as the Pacifica Quartet, Julian Rachlin and concertizes frequently with her sister, cellist Ani Aznavoorian.  She is a founding member of the celebrated Lincoln Trio, which has had successful tours throughout the United States, South America, Europe, and Asia.  Ms. Aznavoorian holds both a faculty position at the Music Institute of Chicago, and an ensemble-in-residence post with the Lincoln Trio at the Merit School of Music.