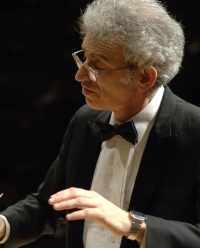 Originally from Bogota Columbia, Mr. Wallenberg earned both his Bachelor's and Master's Degrees in Choral Conducting from the Rubin Academy of Music in Jerusalem, and Brigham Young University in Provo, Utah.

During his years practicing voice, some of his teachers/mentors that coached him and had a large impact on his singing career were: Clayne Robison, Juliette Medioni, and Susan Charles

During his time in Israel, Daniel founded several adult and children's choir's, and sang with the Cameran Singers- a professional choir in Tel Aviv. Given his long-term relationship with choral music, he has extensive experience conducting collegiate, community, professional, and children's choral groups. He has conducted several groups throughout the world and has many choral arrangements to his name. In addition to Chicago Children's Choir, Mr. Wallenberg is the conductor of the Music Institute of Chicago Chorale and the Jewish Reconstructionist Congregation adult and children's choirs. He brings a wealth of experience and a great deal of energy and excitement to the Humboldt Park and Rodgers Park Neighborhood Choir programs.