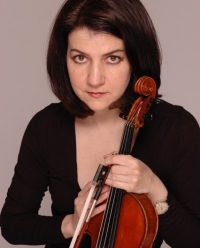 While Plum is always very picky, her teaching style is supportive, motivating and encouraging. She believes that achievement is open to everyone that works hard. She has made a specialty of teaching and focusing on use of bow and phrasing. She teaches intonation by balancing the left hand and working with the natural motion of the hand to help students play with excellent intonation. A big part of her teaching approach is setting goals together with the students and helping them to achieve. Everyone improves if they practice, but she tries to take it one step further by working on practice techniques and finding ways to speed up this process of technical mastery and dexterity.

Sarah Plum began her performing career by winning the first prize at the International Stulberg Competition in 1984. Since then she has carved out a distinctive role as both a pedagogue of note and an interpreter of music both old and new. Recently, Plum has made the decision to move to the Chicago area to focus on pre-college teaching and is delighted to join the faculty at MIC. Plum is excited about this change and eager to work with students earlier in their development in order to fine tune left and right hand set-up, get an early start on the steady diet of technique and etudes that she favors and create successful young artists! Plum has taught at the University of Oklahoma and Drake University as well as summer festivals such as The Bay View Festival, Midwest Young Artists Chamber Music Seminar, The Zodiac Festival and Academy in the south of France and the University of Oklahoma String Seminar. Both her college age and private students have received numerous accolades at competitions, won orchestral auditions, and received fellowships and scholarships to top festivals and conservatory programs. Plum’s performances have been praised as “extraordinary, meaningful and magnificent music” (Berlin Tageszeitung). She has tirelessly championed composers - commissioning, premiering and discovering new works while also bringing them to the attention of a larger public. This has brought her acclaim at noted festivals and venues such as the Luzern Festival, Ars Musica Brussels, Stanford University’s Center for Computer Research in Music and Acoustics (CCRMA), the Music from the Edge concert series at the Andy Warhol Museum in Pittsburgh, Pennsylvania, 3rd Practice Festival, Quiet Cue (Berlin), Spectrum New York, the Center for New Music (San Francisco), the Cube of the Moss Arts Center at the Institute for Creativity and Technology at Virginia Tech, and Unruly Music at the Marcus Center (Milwaukee). Plum’s recent releases on the Blue Griffin label have garnered critical praise: Music for a New Century (BGR 371) features world premiere recordings of violin concerti by Sidney Corbett and Christopher Adler with conductors Nicholas Deyoe and Akira Mori. Whole Note Magazine lauded this release, saying: "I can't think of a better flag bearer than Sarah Plum who is quite brilliant here, or better performances or interpretations. This is an important addition to the contemporary violin concerto discography". Bela Bartok: Works for Violin and Piano, Volume 1 (BGR 373) is the first of a two volume set of Bartok’s works for violin and piano with her longtime duo partner Timothy Lovelace that has been described as having “a fine sense of rhythm and excellent ensemble work…listeners will surely look forward to the next entry in the Plum/Lovelace series of Bartok works."

Plum is addicted to books and reading. Other hobbies include running and cooking.