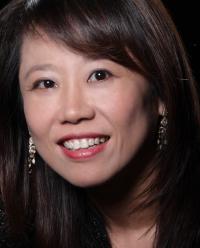 Born in Seoul, Korea, Dr. Soo Young Lee began her piano studies at age nine.  One year later, she moved to the United States to further her musical talent.

She earned her Bachelor of Music and a Master of Music in Piano Pedagogy from Northwestern University.  She then received her Doctorate of Music, also at Northwestern.

Since moving to the United States, Ms. Lee encountered many instructors that had a lasting influence/effect on her career. Some of these individuals include instructors: David Kaiserman, Laurence Davis, and Frances Larimer from Northwestern University, as well as Ann Schein and Herbert Stessin from The Aspen Music Festival. In addition, Ms. Lee was greatly influenced by those that she engaged in master classes with such as Claude Frank, Menahem Pressler, and Nelita True.

Soo Young has performed with Northwestern University Symphony Orchestra, North Shore Concert Band and Chicago Citywide Orchestra. She was the winner of the Farwell Award from the Musicians Club of Women, Corinne Frada Pick Award.  She was also a Grace Welsh finalist and a Society of American Musicians winner.   Ms. Lee had the honor of performing in the master classes of Claude Frank, Menachem Pressler and Nelita True.  Dr. Lee has taught piano and chamber music at Midwest Young Artists (MYA), Merit School of Music, Northwestern University’s National High School Music Institute, Bay Chamber Music Festival’s Next Generation Program in Rockport, Maine and at Loyola University.
She has recently performed live on WFMT 98.7 FM with Kathleen and Peter Van De Graaf and with the ARK Ensemble, which she founded in 2007.

After emigrating to the U.S. at the age of 10, Soo Young Lee has distinguished herself in the Chicago area, earning awards and prizes from The Society of American Musicians, The St. Paul Federation of Music Teachers, and Northwestern University’s Concerto Competition. She teaches piano, chamber music and theory as an artistic faculty at The Music Institute of Chicago and at the MIC Academy. She is also active as the president of The Society of American Musicians and the founder and artistic director of ARK Ensemble.