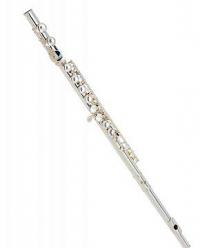 Laura received her Master's in Music and Certificate in Performance from Northwestern University, in addition to receiving her Bachelor's Degree in Music from the University of Washington.

Over the years, Ms. Hamm had many teachers that impacted her career such as: Walfrid Kujala, William Bennett, and Julius Baker. She was also greatly influenced by those with whom she took master classes, such as: Jean Pierre Rampal, James Galway, Doroit Dwyer, and several others.

Laura's achievements over the years include various performances with well-regarded organizations like the Chicago Sinfonietta, Joffery Ballet, Chicagoland Pops, and the Elgin Symphony. Ms. Hamm was also a flutist with Trio Chicago and Friends, and had the opportunity to be a part of the touring Chamber ensemble, traveling to Africa in 2004 and 2005, and Vietnam in 2005. She has done several performance duos with her husband, George Goetschel on World Cruise Company tour, as well as performances with Larry Coryell, Nestor Torres, Michael Feinstien, Howard Levy, Chick Corea, and many more.

Ms. Hamm also has a relationship/background with various music programs around the area. She was a former member of the Goodman Theater Orchestra, Chicago Opera Thetaer, and the New Black Music Repertory Ensemble. She is the Executive Director for the Musical Source of Chicago which is a booking agency for live musical performances, and served on the Board of Directors for Seattle and Chicago flute clubs for over ten years.