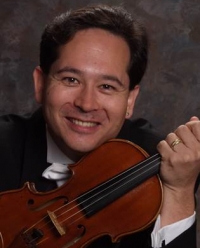 Paul Zafer serves as Concertmaster of the Chicago Sinfonietta and is a member of the Lake Forest Symphony, Chicago Philharmonic, and the Peninsula Music Festival Orchestra in Wisconsin. He is currently on faculty at Wheaton College and Camp Musical des Laurentides in Quebec, Canada, and is a violin coach for the Orchestras at DePaul University.

A native Canadian, Mr. Zafer made his solo debut with the Calgary Philharmonic at age 14. He also has appeared as featured soloist with the Toronto Symphony Orchestra, Joffrey Ballet of Chicago and the Chicago Sinfonietta, with an upcoming solo in March 2019 at Wentz and Orchestra Hall.

Mr. Zafer earned an Artist Diploma from the Royal Conservatory of Music in Toronto, a Bachelor of Music in Performance from the University of Toronto, and a Masters of Music from Northern Illinois University.