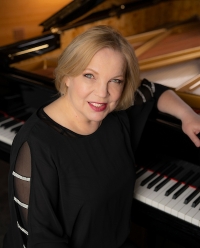 Bachelor of Music, University of Michigan

Marie Alatalo has taught piano for over thirty years. Her primary goals are to provide expert teaching to students from the very first lesson and to help students realize their unique musical voice. She is an Examiner and Founding Teacher (US) for the Royal Conservatory (Toronto) Examinations. Dr. Alatalo's involvement with 20/21st century music brought her to the Chautauqua Institution (NY) where she presented a lecture-recital on George Crumb’s Five Pieces for Piano. She was coached by George Crumb during the Music Institute of Chicago’s “George Crumb Project” and performed both Five Pieces for Piano and Eleven Echoes of Autumn. Her performance of Makrokosmos, Book 1 was featured on “Music on Madison” at the The Musical Offering in Evanston. She has been soloist with the Eastman Wind Ensemble, performing Michael Torke’s Rust and Joseph Schwantner’s … and the mountains rising nowhere. She collaborated with a piano quartet to give the Chicago premiere of Lee Hoiby’s Dark Rosaleen and recorded John Adams’ Hallelujah Junction under a grant from MTNA. She has been the pianist for the Eastman School of Music Musica Nova Ensemble can be heard with the Eastman Wind Ensemble on the Sony release, ”Live in Osaka”, recorded during a tour of Japan.

Marie loves to cook and swim!

"Good enough is not good enough"