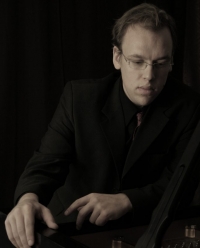 Pianist, Chamber Musician, Composer, Conductor and Pedagogue. Ilya been captivating the audience around the world and the United States. Among Dr.Friedberg's most prominent students is Lucas Jussen. Link to Lucas Jussen Performance

In 2018 he gave masterclasses at Roosevelt University for the Class of Dr. Winston Choi and Edward Auer, At Tel-Aviv University Buchman Mehta School of Music for the class of Dr.Asaf Zohar and at the Indiana University Jacobs School of Music for the class of Menahem Pressler. Dr. Friedberg is a faculty on the most prestigious chamber music festivals in United States and South Africa. He has performed with Pacifica Quartet, Atar Arad, Mark Kaplan,Joseph Swensen,William Harvey, Gil Apap and Verona Quartet. His Trio, Bloomington Trio, was founded and coached for 6 years under the guidance of the great Beaux Arts Trio pianist Menahem Pressler.

Ilya is a co-author of Children Methodical book completed together with his mother (his first music teacher) . An active teacher, Dr.Friedberg enjoys introducing first musical encounters to young students at Music Institute of Chicago as well as more advanced students.

Neither a lofty degree of intelligence nor imagination nor both together go to the making of genius. Love,love, love, that is the soul of genius. (Mozart)

To talk well and eloquently is a very great art, but that an equally great one is to know the right moment to stop. (Mozart)

Stay with me to-night; you must see me die. (Mozart)

Practice slowly and at PP

Nationality as Rhythmic/Melodic Line: A Study of First Language and Compositional Output

The concept for the Variations Project was to create 30 new variations for piano, based on the original canon used by Bach in his Goldberg Variations. To achieve this,18 composers were commissioned from around the world, both established and emerging, to write their own variation(s). No direction was given as to style or approach, only to use the canon and not to exceed six minutes. The ﬁnal work consists of 60 variations, Bach’s 30 original, and 30 new. The form is ﬂexible, in that the order can vary from performance to performance. Abridged versions can also be culled from the whole. The variation form has consistently fascinated composers and musicians. Everywhere in nature we can see some version. Simply consider DNA replication and fractal geometry; as well as the evolution of a species and the birth of galaxies. It is the process of beginning with the simplest elements, and evolving through variation to something much more complex, and quite often, unexpected. Bach used a simple canon, as did each new composer, so the variations all come from the same “seed”. The almost 300 year gap between Bach and today, gives us another dimension of the musical evolution from the 18th century to the 21st.