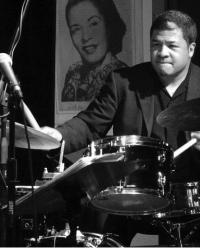 Ernie studied jazz at North Texas State University and The University of Wisconsin-Milwaukee.

Adams appears on over 100 recordings and his performance and production credits include movie soundtracks and radio and television jingles. In particular, he performed and co-wrote the soundtrack, and appeared in, the 1995 motion picture A Family Thing starring Robert Duvall and James Earl Jones.

For over 15 years, he has tutored in the Chicago public schools. He is currently on the faculty at the University of Illinois-Chicago and provides instruction for Orbert Davis' Music Alive program, The Jazz Institute of Chicago, Ravinia and the Music Institute of Chicago.