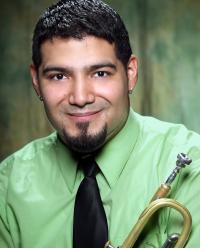 Victor began his education at the University of Illinois, but transferred to Northern Illinois University due to an increasingly busy schedule in Chicago.

One of Victor's most significant teachers/mentors over the years was Michael McLaughlin, with whom he studied during his time at the Merit School of Music.

Victor first began playing with various Latin bands, including Ricky Luis (singer of N'Klabe of Universal Records), Angel Melendez & the 911 Mambo Orchestra, Johnny Rodriguez's Latin Inspiration, and Papo Santiago and Infraverde during his time at the University of Illinois. He also studied with classical luminaries Ron Romm of the Canadian Brass, and with jazz saxophone master, Ron Bridgewater. After transferring to Northern Illinois University, Mr. Garcia began playing in the NIU Jazz Ensemble under Professor Ron Carter. During the time when he was involved with the group, Victor met pianist Darwin Noguera and shortly thereafter, the two founded the band now known as the Chicago Afro-Latin Jazz Ensemble (CALJE). CALJE has performed at jazz festivals such as the Chicago Jazz Festival, the Isthmus Jazz Festival, and the Made In Chicago Jazz Series.

"...trumpeter Victor Garcia – one of Chicago’s most exciting young musicians, equally adept at Latin music and pure jazz improvisation..." [-Neil Tesser, examiner.com] has established himself as a musical force to be reckoned with in Chicago and beyond.  Howard Reich of the Chicago Tribune says "Garcia...stands as an ebullient soloist, offering a formidable technique and a radiantly polished tone."

Mr. Garcia continues to freelance in Chicago and beyond. Some of his notable performances include: the Montreal Salsa Festival with Angel Melendez, a live DVD recording at the Grand Ballroom in Navy Pier with Ernie Hasse & Signature Sound, the Blues & Brews Fest in Telluride, winning the Grand Prize at Buddy Guy's legends for the Union League Club Jazz Improvisation Competition in 2009, and playing aboard Oprah Winfrey's Trip Of A Lifetime Mediterranean Cruise with Walt Cunningham.

Victor has also recorded on dozens of albums, two of which garnered Grammy nominations in 2005 and 2008. He is also a teacher at the Chicago Jesuit Academy, and the proud instructor of many private students.