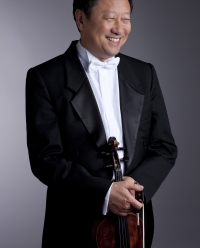 Li-Kuo attended the Eastman School of Music and young-artist fellow at the Music Academy of the West where he graduated after being on full-scholarship.

While Mr. Chang had the opportunity to study with many talented violists over the years, several of his most significant teachers were those that he studied with at the Eastman School of Music, which includes:  Francis Tursi, Donald McInnes, Milton Thomas, William Magers, and Paul Doktor. One of his biggest mentors was also William Primrose, whom he played for in one of his master classes.

Mr. Chang has had many incredible opportunities over the years. Some of his most impressive accomplishments include: being the assistant principal viola of the Chicago Symphony Orchestra since 1998, and appearing with many orchestras as a soloist, including the Chicago Symphony. He has also been an active chamber music performer, collaborating with many renowned artists such as Daniel Barenboim, Christoph Eschenbach, and Pinchas Zukerman in concerts at the orchestra Hall in Chicago, as well as Ravinia Music Festival, Los Angeles Music Center, Staatsoper in Berlin, Lucerne Music Festival, and Jerusalem Chamber Music Festival. Li-Kuo was also a first prize winner of the Chinese Young Artist Competition, held in Changhai in 1978.

Li-Kuo was invited by Daniel Barenboim as guest principal viola of the Deutsche Staatsoper Berlin and Berlin Staatskapelle between 2000 and 2007, and appeared with the two ensembles in many European and Asian tours, including Wagner’s complete Ring cycle in Japan. He has also held faculty position at various Universities, including Northwestern University from 1993-2008, and Roosevelt University since 1998. Since September 2011, he joined the faculty of the Peabody Institute as an artist teacher and has also been on the faculty of the Affinis Music Festival in Japan since 1992.